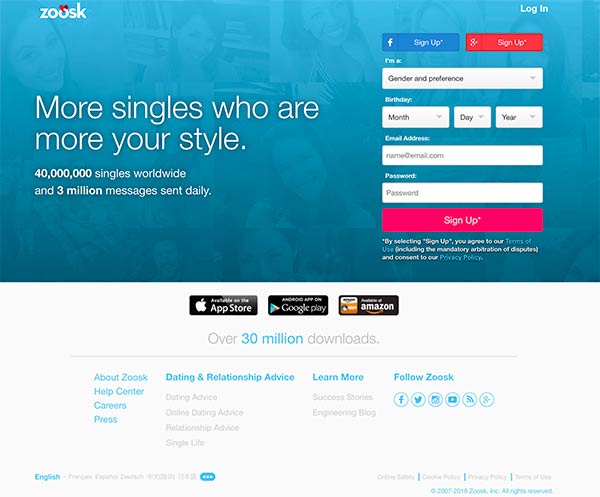 In its early years, US based Zoosk allowed their members the freedom to access more features than most without having to upgrade, allowing them to build a substantial database and grow fast. In the last couple of years, the reality of no longer being a start-up has meant that they have changed their pricing model to require their members to make a payment in order to send more than one message after registering, bringing the dating site into the category of subscription dating sites (along with other 'pay to use' UK dating sites like Match, eHarmony and Cupid).

If you're wondering if they can compete with such well known online dating sites available in Britain, then rest assured that they have a good track record so far. With 30 million downloads of their app, 40m global users of their platform (27m based in the UK, according to a recent Daily Mirror article) and 3 million messages sent between users every single day, Zoosk is already a well-established top dating site.

Another reason for their fast growth has been their propitiatory built-in behavioural matchmaking engine, which despite being quite a mouthful is actually very useful, as it uses data from your clicks to match you with singles that they say are more likely to be mutually attracted to you. This innovation, along with the launch of an easy to use app (available on iphone, amazon and android) and some strong marketing behind the site in general has propelled Zoosk into one of the leading UK dating sites.

The front page of Zoosk's UK online dating site is somewhat minimalistic compared to its competitors, but signing up is pretty straight forward. You're asked a few questions about yourself as you join, and although this makes joining a slightly longer process than elsewhere, it makes sure that you're bulking up your dating profile page automatically as you go.

After confirming your email to validate your account for security reasons, it's possible to begin the search and contacting of local singles. You're initially shown a tutorial on how to use the dating site, something that surprisingly few online dating sites usually bother with but that can be a great help to the many new online daters that try to find a relationship on the internet every day. When searching for people looking for love in your area the results are displayed one at a time, rather than the typical page full of profiles. This gives you more of an opportunity to analyse each person you're paired with but has the downside of slowing the search process down a little...with Zoosk you're certainly never speed dating!

Creating your profile on Zoosk

Another major difference between Zoosk and the other major online dating sites is the requirement  to validate your mobile number. In order to start communicating on the site, this, along with the uploading of a profile photograph, is mandatory. A lot of dating websites ask for these things but never make it a blocker to using the site, but Zoosk have taken the decision to fight the industry issue of non-genuine registrations by making sure every member is linked to one phone number and has added a picture, which goes to their moderators for checking. Incidentally, Zoosk also offer the option to upload a selfie video for the moderators to enable them to verify (for those visiting your profile) that your photo is not only genuine, but recent. This is something that our dating review team hadn't seen before!

Along with the standard search, Zoosk offer a 'SmartPicks' area (where their engine matches you with other members). They also have a cool 'Insights' area that summarises your activity (views, messages sent) as well as showing how popular your profile has been. 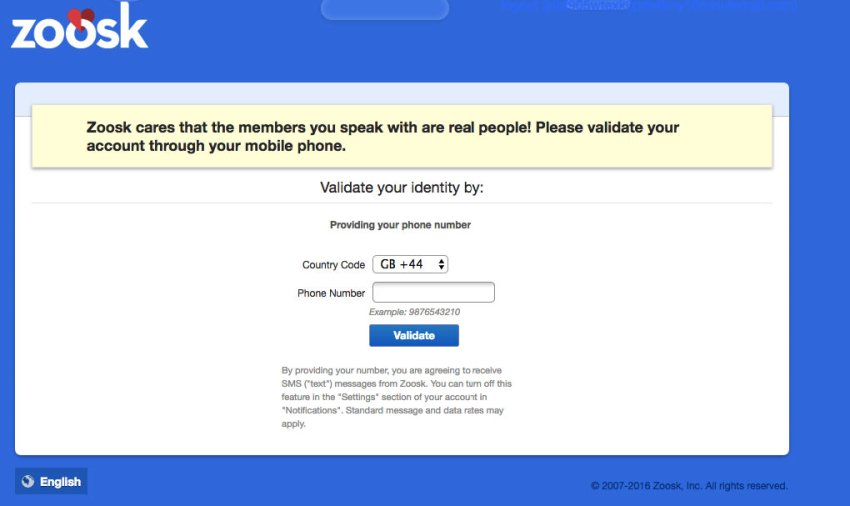 All things considered, Zoosk manages to do something that our reviewers don't often see – stand out from the competition. A lot more effort is applied to extract information from you and then use this to enhance your dating experience. It's something that other dating operators are reluctant to do in case they scare members away but, the way we see it, the people who are serious about finding love online are more likely to stick around on a site that works hard to make sure everyone is there for genuine reasons. Besides, the sheer number of UK singles using Zoosk prove it's doing something right.

Our review team suggest you sign up to multiple dating sites to enhance your chance of finding dates. It makes sense to join 2-3 online relationship sites simultaneously to give yourself the best chance of success. Good luck!